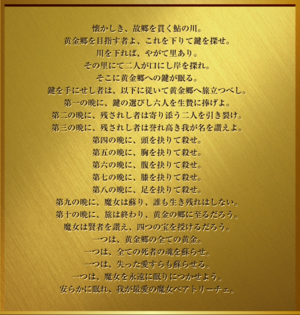 The solution to the riddle is revealed in Requiem of the Golden Witch. Behold the sweetfish river running through my beloved hometown. refers to Kinzo's hometown in Taiwan, Taishou. During the occupation of Taiwan, the Japanese lived in Taipei. The Danshui Line is a railroad that goes from Taipei to Danshui Harbor.

As you travel down it, you will see a village refers to a station on the Danshui Line, Sekihai Station. Sekihai Station was once called Kirigan Station, which has the Japanese character for "village" as part of its name.

In that village, look for the shore the two will tell you of refers to Kirigan Station again. Kirigan Station has the character for "shore" in its name. The "two" refer to the namesake of Kirigan Station, also called Kirigan, which has two characters for "mouth" in it.

There sleeps the key to the Golden Land refers to multiple things. The "key" refers to six things in particular.

On the first twilight, offer the six chosen by the key as sacrifices refers the same key as above. The Taiwanese pronunciation of Kirigan is Qilian which, when romanized, is six letters long. Those six letters are removed from a larger set of letters. This comes from the one discrepancy within the riddle, On the tenth twilight, the journey shall end, and you shall reach the capital where the gold dwells., in which the Golden Land is instead referred to as the capital. Golden Land, in romanized Japanese, is Ougon Kyou, which can also mean Golden Capital. The character for "kyou" in Golden Land can be read as "kei", which is a number equal to one quadrillion. When divided by ten (tenth twilight), only one quadrillion is left. By removing the letters of "Qilian" from quadrillion, you are left with the letters u,d,r,l, and o. What's important is that there are five letters left. The word "kill" is used five times over the course of the next section of the epitaph. On the relief adorning the chapel on Rokkenjima, on a relief, there is a statement written in English, "You will be blessed only at a probability of a quadrillion to one". Each letter of quadrillion has a key attached to the back and can be removed from the relief. For the first twilight, one must remove from the relief, the letters of Qilian.

On the second twilight, those who remain shall tear apart the two who are close refers to the "d" and "r" in quadrillion which are the closest remaining letters. The first "l" must be the one that is removed from the relief as you "tear apart those who are close" by moving the r one keyhole to the right.

On the third twilight, those who remain shall praise my noble name refers to rearranging the letters remaining on the relief while maintaining their positions. If done correctly, the phrase "lord u" is spelled.

"On the fourth twilight, gouge the head and kill.

On the fifth twilight, gouge the chest and kill.

On the sixth twilight, gouge the stomach and kill.

On the seventh twilight, gouge the knee and kill.

On the eighth twilight, gouge the leg and kill" all refers to the relief. You "gouge and kill" by turning a key from left to right before removing it.

Once all the letters have been removed, the lion statue outside the chapel will turn to face a different direction. The lion now faces another lion which faces another and so on. Follow the lions to the back of the chapel. There is now an entrance to a staircase leading to an underground VIP room wherein the gold is stored.