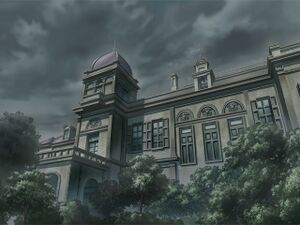 The chapel during a rainstorm.

The chapel (礼拝堂, Reihaidō?) on Rokkenjima is a large building situated in a grove behind the Ushiromiya main building. The outside walls have been repaired many times, making the chapel look new despite it being an old building. Kinzo Ushiromiya sees the chapel as a very sacred place and has harshly warned his children not to approach it unnecessarily. The chapel has its own key and can't be opened with the master keys. The area behind the chapel has a secret entrance to the underground VIP room wherein Kinzo's gold is stored. Due to the chapel's relevance to the witch's epitaph, Genji Ronoue is the only servant allowed to clean the chapel's exterior.

Turn of the Golden Witch

In Turn of the Golden Witch, the chapel is the location wherein the first six characters are sacrificed. Furthermore, the chapel is integral to the solution to the witch's epitaph. On an arch above the chapel doors is an inscription "You will be blessed only at a probability of a quadrillion to one". Each letter of the word "quadrillion" has a key attached to the back of it. When the letters are removed and arranged in the right order, the entryway to the underground VIP room is revealed.

Requiem of the Golden Witch

In Requiem of the Golden Witch, the chapel serves as a funeral hall for Beatrice.

Retrieved from "https://wiki.whentheycry.org/w/index.php?title=Chapel&oldid=18105"
Categories:
Hidden category:
Cookies help us deliver our services. By using our services, you agree to our use of cookies.