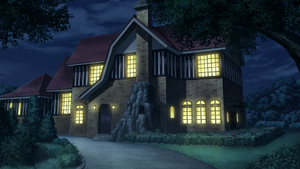 The Fukuin House after renovation

The Fukuin House (福音, lit. Gospel House?) is an orphanage mentioned in Umineko no Naku Koro ni. Many of the orphans at the Fukuin House are trained as maids or servants. Many of these servants end up employed with the Ushiromiya family, working on Rokkenjima. Every known orphan's name ends with the character "音" for "on" or "ne", meaning sound.

After the Rokkenjima massacre, the Fukuin House was forced to close for a time, before eventually re-opening as a welfare institution for parent-less children run by Yukari Kotobuki.

Retrieved from "https://wiki.whentheycry.org/w/index.php?title=Fukuin_House&oldid=18345"
Categories:
Hidden category:
Cookies help us deliver our services. By using our services, you agree to our use of cookies.