From When They Cry Wiki
Jump to navigation Jump to search
This article is about the Ushiromiya family crest. For the manga chapter of the same name, see Chapter 1 (Alliance of the Golden Witch). 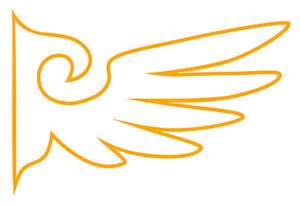 The One-Winged Eagle is the Ushiromiya family crest. The symbol is imprinted on the clothing of all members of the Ushiromiya family and the furniture in their employ. The One-Winged Eagle is derived from the emblem of the Italian Social Republic, a Nazi puppet state during World War II. While Kinzo Ushiromiya was stationed on the island of Rokkenjima as part of the Japanese war effort, a group of Italians came to the island to store large quantities of gold that would later become the basis for Kinzo's fortune. The gold was originally imprinted with a fading symbol of the Italian Social Republic and Kinzo thought it seemed as though the eagle had only one wing. Kinzo then took the idea and designed his own family crest around it, later re-imprinting the gold with the proper family crest.