From When They Cry Wiki
Jump to navigation Jump to search
This article is about the shrine on Rokkenjima. For the shrine in Hinamizawa, see Furude Shrine. 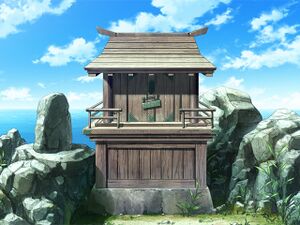 The shrine on Rokkenjima is a small Shinto shrine located a promontory on the edge of the island. The shrine was built by a traveling monk who wanted to dispel the spirits haunting Rokkenjima. The shrine plays an important part in the mythos of Beatrice.

In the summer of 1986, the shrine suddenly disappeared, along with the reef beneath it. This was a result of Sayo Yasuda testing the viability of the explosives hidden beneath Rokkenjima.

Retrieved from "https://wiki.whentheycry.org/w/index.php?title=Shrine&oldid=18131"
Categories:
Cookies help us deliver our services. By using our services, you agree to our use of cookies.