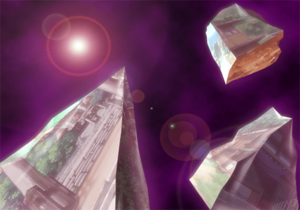 Purgatorio as seen in Higurashi no Naku Koro ni

Most of the debating between Battler Ushiromiya and Beatrice take place in the Witches Smoking Room, an otherworldly room within Purgatorio.

Purgatorio seemingly appears in Higurashi no Naku Koro ni, specifically in Minagoroshi-hen as the Time Void. In the opening scene of Minagoroshi-hen, Rika Furude is seen examining several different fragments in a Purgatorio-esque place before finally entering one.

In Ougon Musou Kyoku, either team may attempt to enter Purgatorio for significant advantages and powerful moves.